If the product is not on the Reverb shop, please contact us for infromation

The IRON mastering compressor is not a copy of a classic unit, but rather an original concept in itself. Our goal was to conceive a compressor that provided a pleasant, melodic-sounding, transparent compression, inspired on the vintage compressors of the radio era. And we wanted it to be versatile enough to adapt perfectly to the needs of modern mastering studios. 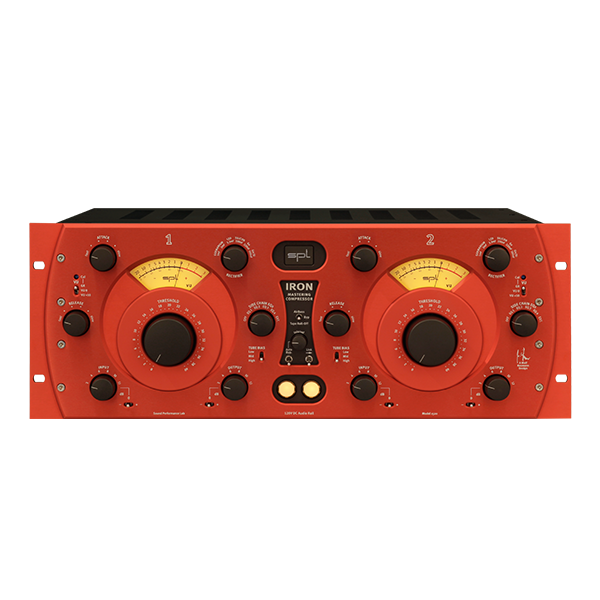 Thus, the IRON combines not only the sonic virtues of legendary vintage tube compressors with the advantages of the High Dynamic 120 V operating voltage in a single unit. It also sets a new benchmark in terms of tube compressor technology, with the innovative implementation of a parallel dual-tube circuit.

The IRON Mastering compressor combines not only the sonic virtues of legendary vintage tube compressors with the advantages of the High Dynamic 120V operating voltage in a single unit. It is also perfect for the needs of modern mastering studios and sets a new benchmark in terms of tube compressor technology, with the innovative implementation of a parallel dual-tube circuit.

Thanks to the especially conceived Mu-Metal iron transformers, the signal of each channel is split across two different twin-triode tubes. The combination of the different response curves of both tubes results in a transparent and musically pleasant compression. Additionally, peak signals of the control voltage are limited by a feed-forward resistive vactrol-opto-isolator. Thus, the output signal remains lively even with a high gain reduction. The compression is only noticeable with extreme settings.

Mastering is not the only domain where the IRON sets new standards. It can also be used to process individual instruments, like vocals, bass, guitar, strings, etc. The IRON is also an excellent option for subgroups.

The basic operating principles of a compressor/limiter can be easily explained. The level of an audio signal is reduced according to the specified attack time and ratio whenever it exceeds a given threshold. This reduction ceases when the release time elapses, while the compressed signal is amplified with the make-up gain.

Compressors basically differ from each other in the technology used. This technology - tubes, opto, FET, or VCA - is what gives a compressor its particular character. Some units sound soft and silky, some sound pounding, while some others make sound fatter, and there are those that make sound clearer, harder or more percussive. The trick resides in how the unit is technically designed, in the signature of the maker. Different compressors with the exact same settings might work and sound completely different. They provide different sounds for different applications and music styles.

Nowadays, the compressor has become a key element when it comes to provide dynamicsand punch to any production. The number of compressors available is huge and it‘seasy to succumb to the promises made by software emulations and analog recreations ofvintage gear as the perfect solution. Unfortunately, many of these emulations and recreationsdiffer quite a bit form their original counterparts. You must simply accept that the components used today, like the transformers, tubes and all other passive elements, are different to the ones originally used and that they can‘t be digitally emulated. No software (DSP-emulated compressors) or hardware replica will ever be able to sound like the original. An authentic sound can only be achieved with the original unit.

The IRON mastering compressor was conceived as a variable-bias limiter/compressor right from the start. However, the implementation of new technologies results in many improvements. Its basic operating principle as a variable-bias tube compressor was loosely inspired by the sonic and technical operation of Fairchild, Collins and Gates compressors, which used remote cut-off of tube biasing to achieve a well-balanced, well-compensated and musical compression.

However, the IRON compressor features a second sharp cut-off tube, a medium-variable bias triode, in its circuit design. This tube is connected in parallel to the remote cut-off tube and it has a considerably steeper characteristic curve. The tube used to process the signal depends on the amplitude of the latter. This results in a more well-balanced sound and more controllable settings of the parameters. The pair of parallel connected tubes has been specially matched for the IRON. In order to guarantee that tube selection and pairing is perfect, we use the Weigl Roe Test for PC. The optimal selection of the tubes guarantees that all IRONs have the same sonic characteristics.

Moreover, we use Lundahl custom-made balanced high-level dual-coil mu-metal iron transformers in the signal flow of the variable-bias tubes, which add to the overall sound.

Thirdly, the complex rectifier circuit is also worth mentioning, since it is the basis for tube control. You can use the six-position switch to choose either of the six different control characteristic curves of the diodes within the rectifier. Given the specific characteristic curve of its elements, the combination of germanium, silicon and LED diodes produces different behaviors and characteristics for the Attack and Release times.

The fourth exceptional feature is the comprehensive logical relay circuit that perfectly links both channels together, making the right channel the Master regarding Release, Attack, Threshold, Rectifier, Tube-Bias and Side-Chain EQ settings.

In stereo Link mode, the Threshold, Tube Bias, Attack, Release, and Rectifier parameters, as well as the Sidechain EQs, are controlled with the right side (channel 2) of the unit. In contrast to the Dual-Mono mode, in stereo Link mode the compressor works with a sum signal. Thus, the stereo image is wider when working with the Dual-Mono mode on stereo material.part, the Tape Roll-Off mode is based on the frequency response of a tape machine and uses a high and a low-cut filter.

All functions can be adjusted via switches or, in the case of the Threshold, with a detented potentiometer, making it easy to replicate exact settings.

The Sidechain EQ is yet another option to adjust the Iron to the signal being processed in an optimal way. It allows you to choose between an external EQ or one of the four internal EQ presets. The EQ presets have a complex frequency response and have been conceived with different program material in mind. Only the control signal is affected, not the actual audio signal. In the Off position, the Sidechain EQ is inactive.

After the compression stage, the signal can be boosted or attenuated up to  /- 12dB with the Output Gain, which makes the IRON easy to integrate into any signal chain.

Both the left and right channels have separate illuminated activating switches. Further, in Auto Bypass mode you can use the Interval control to set a time frame during which the compressor automatically toggles back and forth between the processed and unprocessed signals. This makes AB comparisons between the original and compressed signals a breeze, besides making it easier to assess the settings in context. 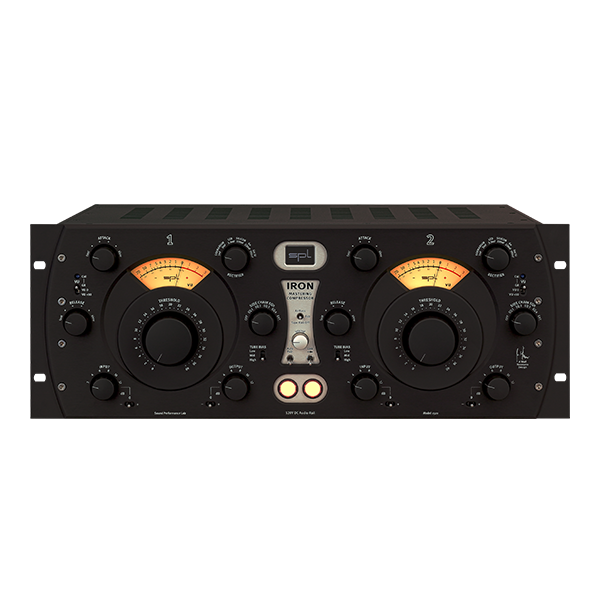